K-9 and Company
A quiet village harbours dark secrets - and a robot dog! 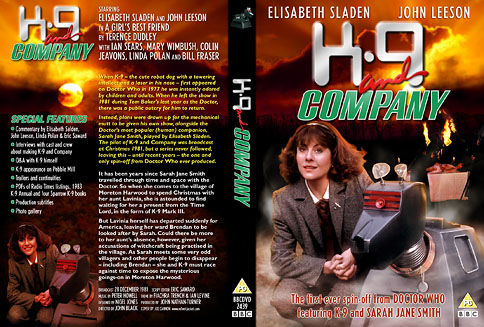 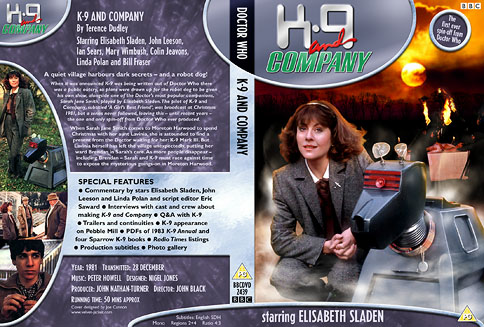 Well done for finding my covers for 'K-9 and Company'. As you can see, there's a unique design, befitting the programme's spin-off status, and one in the usual Velvet Jacket style. I wasn't originally going to do the latter, but the illustration for the former fitted surprisingly well in the VJ template, as did the logo, so I decided I'd give a choice.

Producing the logo ended up being more tricky than I'd hoped. Unable to find suitably matching fonts to base it on, I ended up drawing it from scratch. Handily, the trailer on the 'Invasion of Time' DVD featured a nice shot from the freshly transferred title sequence, so I had a reasonable quality grab to base it on (certainly better than the fuzzy VHS grab I started with). I've added some texturing and shading of my own to give the logo a slightly more modern feel, and am pleased I got my hand-drawn 'and' rather more accurate than Clayton's on the official cover <grin>. As for the illustration, I wanted to keep it simple and was originally going to feature just Sarah and K-9 against the sunset. The space above and behind K-9 really needed something, though, so I added Brendan's sacrifice and the silhouetted treeline to the horizon. Experimenting with some smoke-creation Photoshop techniques resulted in me adding a layer of fog at the last minute.